Fourth Generation District Heating Networks are designed to work at lower temperatures and enable a more cost effective transition away from burning fossil fuels toward heat supplied from local renewable and secondary heat sources, such as from waste heat or heat transfer from groundwater.

The objectives of 4G district heating networks include:

The first generation of district heating from the 1880s was based on heat distribution by steam.

The second generation from the 1930s was based on pressurised hot water with temperatures above 100°C.

The third generation from the 1970s was also based on hot water, but with temperatures below 100°C and usually incorporated prefabricated parts in construction. Many suffered from poor temperature control systems.

The fourth generation is based on a lower temperature water distribution at around 65°C to limit installation costs and heat losses to the ground, together with a higher contribution from renewable energy and waste heat in order to limit carbon emissions and reduce air pollution.

A 4GDH network is coupled with higher insulation standards for buildings to restrict the amount of heat needed and looks forward to the electrification of heat by using heat transfer instead of combustion to provide the heat and to integrate with smart electric networks to balance the demands on the electric grid by using the thermal mass of buildings to store heat, and to restrict demand for electricity when there is supply pressure on the grid.

The clear trend for district heating systems is to move to much lower distribution temperatures and distributed heat transfer instead of combustion.

The logical conclusion is to move toward distributing water circuits at near ambient ground temperature and to use heat pumps in each building to extract heat from the network if the building needs heating – and to reject heat to the network when a building needs cooling: fifth generation district heat networks.

These fifth generation district heating networks allow for provision of efficient heating and cooling in city centres without emitting any CO2, and without contributing to urban air pollution.

It also allows for the collection and reuse of waste heat at any temperature above ambient ground temperature. 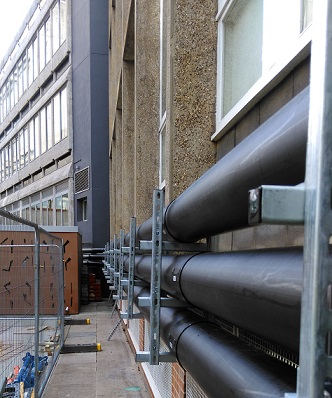 All the objectives of fifth generation district heating systems can be achieved by using Heat Sharing Networks that use low temperature water circuits between buildings. Each building has a heat pump to extract the heat that it needs from the network.

This arrangement allows for further benefits in terms of cooling, because any building that needs cooling can use its heat pump to reject heat to the communal circuit.

An advantage of this move to an electrification of heating is that it also opens up the chance to use demand side response to shift the timing of use of electricity away from peak tariff times toward times when electricity is cheaper, often at night. This smart grid principle can be extended further if the site also employes thermal energy storage.