Mindful of the need to control carbon emissions, the Mayor of London has produced a District Heating Manual for London. It states that:

With energy at the heart of our major cities' transformation to sustainable, resilient low-carbon communities, the delivery of new energy infrastructure will be critical to securing our energy future. It is in this context that the Mayor of London has produced this District Heating Manual for London. The District Heating Manual is intended to provide guidance to the development and delivery of district heating networks in London.

The 83 page document, produced in collaboration with Arup, is recommended for its practical approach to district heating design.

Some quotes from the chapter:

Comfort heating temperature for domestic users is typically around 21°C and hot water for kitchen use is near 55°C. If low grade heating systems were employed in designs, such as larger radiators or underfloor heating, then the requirement for high flow and return temperatures in a district heating network would be reduced. Operating at lower temperatures increases the efficiency of the system due to the smaller temperature differential between the fluid and the ground, thereby reducing transfer losses. Operating at lower temperature also offers the opportunity to exploit waste heat from sources such as process energy harvesting and solar thermal energy.

By reducing the operating temperatures of the district heating network, the use of polymer pipework rather than steel becomes viable, thus significantly reducing the cost of materials and, with the removal of welding requirements and reduced transport costs, the cost of installation.

Heat networks with a higher temperature differential require lower flow rates to deliver heat, thereby saving on heat transfer losses and pumping requirements. Pipe diameters can be reduced by lowering the heat demand in the loads through good practice energy efficiency measures. Localised hot water storage in individual buildings could be used to flatten the demand profile or buffer tanks on the primary side of the heat exchanger would have the same effect.

District cooling operates on the same principles as district heating, whereby chilled water is produced centrally and distributed through a network of insulated pipes. This removes the requirement for energy intensive local cooling in buildings, thereby reducing the city's carbon output.

District cooling has been successfully incorporated into district heating networks in Helsinki and Copenhagen as a complementary system, making a trigeneration scheme providing electricity, heating and cooling. Copenhagen's scheme uses cold seawater as a source of free cooling and uses surplus heat from the district heating network to drive absorption chillers to provide cooling when cold seawater cannot meet peak demand during the summer. This scheme has allowed Copenhagen to reduce the CO2 emissions by 67% when compared to traditional cooling.

The installation of a CHP district heating network is the ideal time to install district cooling when the major ground works are taking place to install the heating pipework. District cooling schemes are most attractive when there is a large heat sink locally, such as the sea which can act as a free source of cooling. In direct comparison with electrical chillers, the coefficient of performance of an absorption chiller is poor. As the grid decarbonises, it is important to consider both options for cooling.

The interesting threads of thought running through these points have been synthesized into a radical new approach to the design of heat networks which is being implemented by the BEN Consortium at the London South Bank University: a heat sharing network. 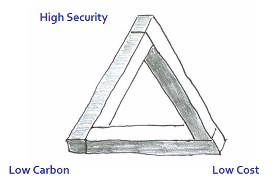 There is an alternative to gas-based CHP district heating which is more effective in resolving each of the three facets of the Energy Trilemma. To avoid emitting CO2 from heating it is important to avoid combustion. This can be done with the electrification of heating and utilising:

These can all be achieved using ground source heat pumps, which can also concentrate heat.

This radically simpler mechanism yields no carbon emissions on site – nor any other product of combustion – and allows for incremental expansion of the network at marginal cost. Each building is in control of its own costs and its own temperature controls.